Samsung was one of the first smartphone manufacturers that had come up with extra sized displays, which were known as “phablets” during that time. Others had also tried this formula but were not able to able to get massive success like Samsung. The making of over-sized phones was started off by debut of Galaxy Note, which was warmly received by android enthusiasts. Following the same lines, Samsung had announced Samsung Galaxy Grand 2, which was mid-ranged smartphone with exuberating 5.25 inches display. I have been using this device for almost 2 months now and I am quite satisfied with its performance.

When you hold this device, you will notice that there is nothing new in terms of design. It looks like exact replica of its predecessor, i.e. Grand. The design is similar to the 2013 flagships, Galaxy S4 and Note 3 with thin bezels. However, Samsung has ditched the glossy plastic back for the faux leather textured plastic on the back, which first debuted on Note 3. Now, don’t expect the same features as that are present in Note 3, since it is priced approximately half the price of Note 3. But the new faux leather is not finger print magnet like the previous Grand.

The usages of build materials have changed, but the positioning of buttons is same. To the right of the earpiece, there are ambient light sensor and proximity sensor, and slightly down, you will find the 1.9 MP front camera. Below the display, there is physical home key, which is accompanied by 2 capacitive keys on its either side. The dimensions of the device are 146.8 x 75.3 x 8.9 mm and it weighs about 163 grams, almost equal to the previous Grand. Moving to the back, there is 8MP shooter with LED flash. You will also find speaker grill next to the camera. 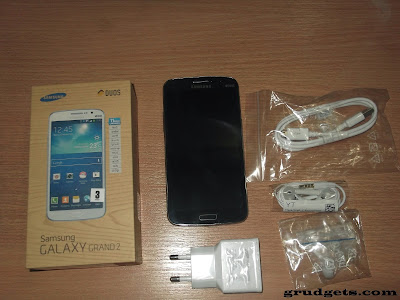 One of the biggest problems with previous Grand was its mediocre display. The display was also not that great and had poor resolution. To make things better, Samsung has equipped Samsung Galaxy Grand 2 with 5.25 inches TFT display. The resolution is about 720p, and the pixel density is also pumped up to 280, which is 100 ppi greater than previous variant. The display is sharp and performs well most of the times. Color reproduction is not that great as compared to AMOLED displays, but can be considered satisfactory since it is mid-ranged device. Sunlight legibility is also average, but not similar to that of AMOLED displays. Overall, there has to be lot of changes in this department, but considering the price factor, the display seems well above average.

This is the area which needed lots of improvement and Samsung has taken great efforts to do so. The Samsung Galaxy grand 2 is powered by quad-core Snapdragon 400 processor clocked at 1.2 GHz along with Adreno 305. This chipset is similar to the one present on Motorola’s Moto G. In terms of performance, Grand 2 can prove worthy and also handle multi-tasking with ease. However, that is not the case always. Sometimes, you will have to wait for about 2-3 seconds for the contacts to load. Once it is cached, than it may load up quickly. As far as software is concerned, it runs on Android v4.3 Jellybean on top of Samsung’s Touch wiz UI. There have been few updates, which were referred by Samsung as “stability updates”, the latest build being E2. Several sources have confirmed that KitKat will be arriving to Grand 2 by the end of this month; again it is not confirmed officially by Samsung.

One of the things that remain stagnant is camera. The camera specifications for all devices like Galaxy S3, previous Grand, Mega 5.8 and others are the same. Though the specs are same, the camera UI has changed a lot since then. The main camera is capable of 1080p full HD video recording, whilst the front camera can record 720p videos. The quality of images is quite good and they can house good amount of details. The Panorama feature works flawlessly. The images taken during night time are also good, which are quite close to compare with the quality of images from high end devices.

There are ample of connectivity options present. It has dual micro SIM card slot with smart dual SIM and supports 3G feature. Additional options include Wi-Fi, GPS, micro USB and Bluetooth v4.0. Even though it runs on Android 4.3, there is no Miracast support. Unsurprisingly, it lacks USB OTG feature which many people consider these days.

The storage is the main factor that keeps many users away from Samsung. The Samsung Galaxy grand 2 boasts 8 GB internal storage, of which approx. 5GB is available for user. The amount of RAM available at startup is around 700 MB, which is less considering the total available RAM is 1.5 GB. The memory is further expandable up to maximum of 64 GB through micro SD card slot.

The power needs of this phablet are fulfilled by 2600 mah battery. Seriously, I was quite amazed by the battery backup. For normal usage, you can easily squeeze in 2 days of backup. While streaming videos over Wi-Fi at around 70% brightness, I was able to get backup of just above 6 hours until it was left gasping for juice. So, if you are going to use it only for voice calling, messaging and few minutes of web-browsing, then you can expect more backup. 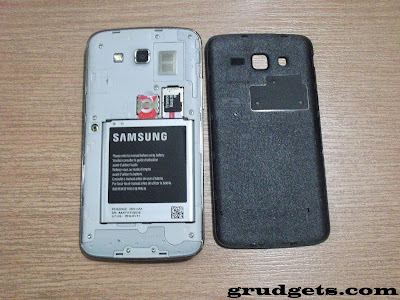 In terms of gaming performance, Grand 2 performed better. I do not play many games, so tested out only few of them. Asphalt 8: Airborne worked like a charm without any lags and did not drop frames at all. Other casual games like Farmville 2 and Subway surfers also worked without any lags. There is Adreno 305 GPU, so it can handle most of the games without any lags.

The price of Samsung Galaxy Grand 2 on Samsung India official store is about 23,000 INR. But you can get it at much less price online than what you would pay for getting it from local store. You can buy it now from Amazon for 18,849 INR in black or white color or at a slighlty higher price from Flipkart.

Overall, Grand 2 proves out to be good performer. With quad core processor and Adreno GPU, you can be assured of high processing power and use multi-task with ease. There were many flaws present in the previous Grand which have been overcome by the South Korean manufacturer. So, if you are looking to get a higher mid-range performer, than you won’t be disappointed by Grand 2.